THE DANCING LADIES OF SHANGHAI

THE DANCING LADIES OF SHANGHAI

Amongst all the frantic social pattern  of human activity buzzing around me I noticed a gap in the crowd. A group of four or five old women who must have been about twenty years younger than me were standing there talking with smiling faces. They seemed a happy friendly lot. Hope… And they looked to be on their own. Even better. Between them, they would surely put me right. They started performing a strange mystical dance, waving their hands in the air haphazardly and emitting ghostly synchronized whoops. It looked well-orchestrated and it was pretty and must have taken a lot of practice to get it right. Well, this is another side show to keep the queue entertained during the slow shuffle to the show. Nope, better not, then! But I changed my mind immediately. I was going for broke here. They’re artists, they’re actresses, street performers, they wore long white robes and bore a mysterious air, they’ll be educated people, surely they’ll speak something of the language of Shakespeare. They won’t like to be interrupted but so what? It looks like they haven’t quite started the show yet, they’re probably just limbering up. Hey, this is just a one-off, I’ll never lay eyes on them again, what the hell, here I go!

Cagily, I approached … and then, one – two – three, I barged unceremoniously through the last people in my way. I was like a madman as the sound of Haipat, Haipat became louder and louder, huh, a hotdog’s the last thing I need.

I made for the nearest lady. When she  saw me coming, her face froze and she shrieked …and the others followed suit.

Jeez, was I that bad?

They threw their hands in the air as though imploring assistance from ahigh.

Did I really look that bad?

Did I look like somebody on a police Wanted poster? Did they think I was going to harm them? 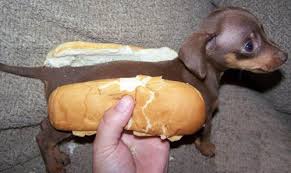 Huh, a hotdog’s the last thing I need

I think the cut of me frightened them no end. I wouldn’t blame them. I tried to ask them how they were, quickly, two ni haos in rapid succession.  (bloody hell, it was bad enough just saying it once but for some reason I must’ve felt I had to say it twice even though all I was doing was compounding both the language and the health issue!) and they scuttled off in different directions like frightened ducks in a pond after some little monster dropped a rock in there. They probably thought I’d escaped from a mad-house.

I should never have accosted these poor women who might well never have laid eyes on a westerner before but again I wasn’t thinking straight, panic knows neither reason nor bounds.

Then … the penny dropped. They were apart from the throng because they were stark-raving mad themselves and that’s why people were giving them a wide berth. I was the cat, they were the pigeons. They could be rounded up at any moment. I froze. 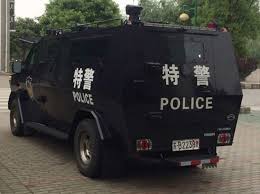 A Chinese paddywagon at rest

The siren wailed louder. I hustled my way over to the side faster. I was rude. Very rude. The sound was ear-splitting. I stood on peoples toes. Then someone stood on my fucking toes. AUO GUAU!! Jesus, I was only wearing one shoe. Wrong foot. I winced. But it was just a physical pain embedded in mental agony. I just needed away fast and I soon forgot about it.  People shouted at me. I didn’t care .. I didn’t know what they were saying.The air filled with chaos. I trampled a kid.

I trampled maybe two. who cares? what were they doing there anyhow!  Then a van arrived, strobe lights whirling frantically. I stopped, turned and looked. Disturbing scene amongst the throng which sent my pulse into a terrible frenzy. Yet I stood there ….stuck to the spot. I dare not move but to breathe.I was right beside the action. Would it be me or these women? Was I the one they were looking for in the crowd or was I just ne among the crowd. Then I heard them.

They squealed and they squawked, they blubbered and whined. I contemplated the pathetic scene conscience-stricken. But as much as l pitied them being roughly and hastily hauled away towards the Chinese paddywagon and then being brusquely bundled inside, I breathed a sigh of relief, … it could’ve been me.

Now …I could get on with my other problem. I managed to push and shove my way sidewards across the horde which had by now, on account of the arrival of the police van, become a scuffling babbling mob … jostling to regain their place in what was once an orderly queue. 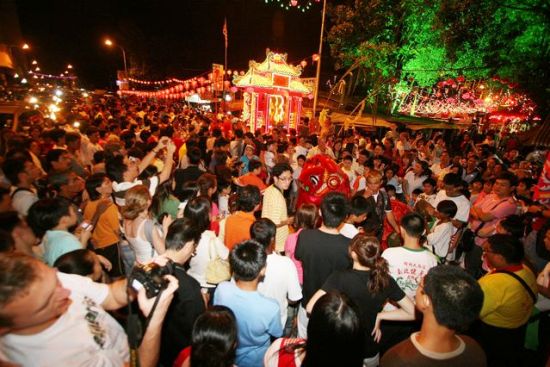 I was now virtually on the edge of it again.